While the crop looks good in many parts of SW MN, moisture stress is starting to show in others. While some areas received rain since the last issue, many did not, and they need rain soon. The forecast does not look promising.  SWROC staff will take soil moisture data on August 1 and we’ll have a better picture of how much trouble we might be in.

The emergence of northern and western corn rootworm beetles continues. Some have started scouting for beetles and more will be hitting fields next week. This week, I attached a couple of PDFs on scouting and rating corn roots for injury. Whole-plant beetle counts and sticky traps both have a place in rootworm management. If you are wading through clouds of beetles while hanging sticky traps, you already have an indication that some changes in rootworm management are needed for that field.

Some have added an insecticide to foliar fungicide applications hoping to kill rootworm beetles. The goal may be preventing silk clipping or egg-laying, revenge, or income avoidance.

Remember, beetles are still emerging, and beetles can move into the field from neighboring fields. If the goal was to prevent egg-laying, it is important to re-scout “beetle bombed fields” after foliar insecticide applications. Insecticide/fungicide applications can be detrimental to biological control. Watch those fields for secondary pest outbreaks such as spider mites and aphids.

There have been more armyworm problems reported from field corn. These continue to be related to grass cover crops or late control of dense grassy weeds.

We captured a few western bean cutworm moths in the SWROC black light trap this week. It is unclear whether these were locally produced or brought on winds from more heavily infested areas to the south. While this insect has not been a significant pest in Minnesota, you might want to look for egg masses during your early rootworm scouting efforts. Late-tasseled fields will be most attractive to the egg-laying moths. This UNL webpage provides a nice summary https://cropwatch.unl.edu/2020/scouting-and-treatment-recommendations-western-bean-cutworm.

Cereal aphids have started to move from maturing grasses and small grains into corn. I am starting to find scattered, small colonies of bird cherry-oat aphids- mostly in the lower canopies. English grain aphids are another species that is often found in corn. An economic benefit from treating large cereal aphid populations in post-pollination corn is far from certain.

Soybean aphid populations continue to increase in some, but not all, southern Minnesota fields, including those we check regularly at the SWROC. I suspect aphid populations will collapse in areas where soybean moisture stress increases. 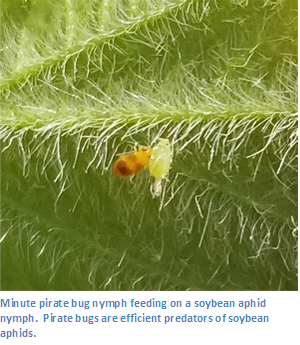 Defoliators
Red-headed flea beetles, 1st generation bean leaf beetles, and grasshoppers  (predominately red-legged grasshoppers at the SWROC and differential grasshoppers in other areas), are the most common defoliators in the fields I have been in.  Adult grasshoppers are starting to appear. The winged adults are much more mobile than adults and can rapidly move into fields from the areas where they hatched.

This summer, a potential new soybean pest, the hog-peanut leaf miner, has been found in more areas of Minnesota. Soybean injury consists of distinctive blotchy, clear mines on the underside of leaves. For a description and pictures of the moth, the larva and injury it produces, and what to do if you find plants with symptoms, see the crop news article keep an eye out for hog-peanut leaf miner. This insect has also been found in southern Minnesota since the crop news article was published. 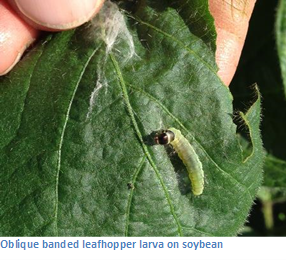 For those of you who like to get into the weeds on herbicide resistance, you might enjoy a recent piece on glufosinate resistance from researchers in the land down under. https://www.ahri.uwa.edu.au/how-target-site-glufosinate-resistance-works/

As always, I appreciate hearing what you are seeing out there.