Corn rootworm beetle activity remains high in many fields. Late silking fields are attracting beetles now, particularly northern corn rootworms.  There are some soybean fields with abundant volunteer corn plants. These will also be attractive to egg-laying rootworms. Remember this when you plant corn next spring.

Fall corn borer and disease survey. Please let me know if you have any non-Bt corn fields that you would not mind having some University of Minnesota types (most are quite harmless) check for European corn borer.

Most fields have a long way to go before much seed yield is fixed.

Bean leaf beetle populations may be pod feeding now. Mike Blaine reported a field with BLB and pod clipping. While populations in Minnesota may not be as high as those described in this 2021 Purdue article on bean leaf beetle and pod feeding , the sampling technique and thresholds are valid.  Randy Larsen reported clipped pods in a field with large numbers of crickets. Grasshoppers are also a concern.

There are still some fields in drier, light-textured fields with two-spotted spider mite symptoms. In most cases, severe symptoms are limited to the very outside rows of the field, but I am seeing more colonized leaves at the SWROC.

Soybean aphid populations continued to increase over the past week in many areas.

Again, geographic areas with late-planted and/or late-maturing soybeans seem to be seeing the most recent population increases. Remember, aphid populations can increase dramatically on late R5 and early R6 stage soybeans. This recently happened this week in some late R5 soybeans at the SWROC.

I’ve not yet seen evidence that movement to buckthorn has started in southern MN. While wasp parasitized aphids and predators are present in many fields, I have not seen much evidence of fungal disease.

The return of yellow beans. Curt Burns reported Sudden death syndrome (SDS) increasing in parts of SW and C MN. SDS was observed in some fields with an SDS seed treatment. I noticed an unusual percentage of fields with small areas of SDS symptoms while traveling through much of SW MN yesterday.

SDS is not the only cause of yellow beans. Frenchy Bellicot called about yellow beans where soybean aphids had not been controlled. The affected plants appear to have potassium deficiency symptoms. Soybean cyst nematodes (SCN) can also cause similar symptoms in lower pH soils. 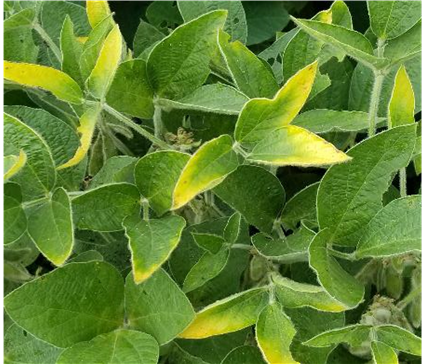 Hope to see some of you at the pest management field days at Lamberton and Rosemount next Wednesday and Thursday.