Much of Minnesota could use a rain, and hopefully we can pick up a “moderate” amount on Friday. There are areas in the WC, C, and NW that have missed most April and May rains. 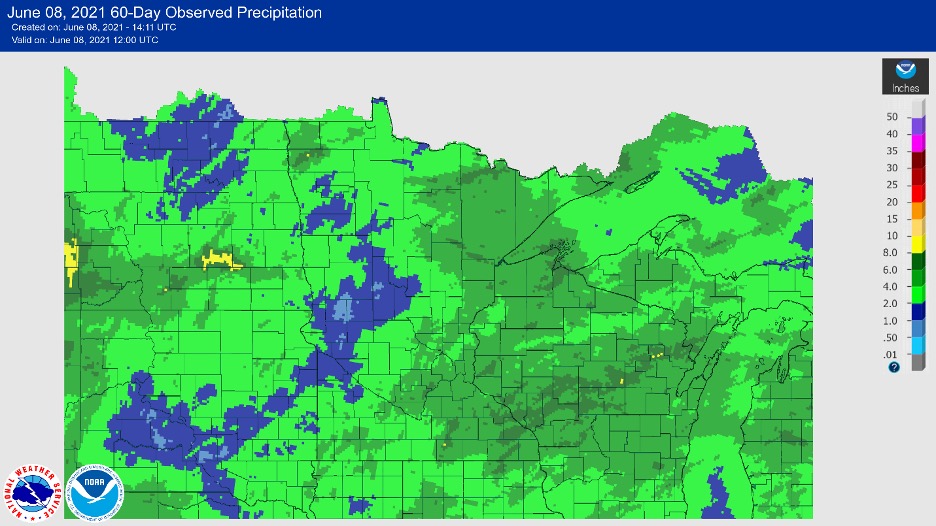 The current hot and dry weather is ideal for spider mites. If it continues into reproductive stage soybeans, this could be a bad two-spotted spider mite year in soybeans. These arthropods overwinter in perennial vegetation. Harvesting alfalfa and mowing roadside grasses can help force the mites into crops.

A general "heads up"

Folks are finding crane fly larvae in fields now. They are a fly larva; they feed on decaying organic matter. They are not a cutworm and not a crop pest.

Corn rootworm eggs will be hatching soon. I ran one of the rootworm developmental models for western corn rootworm egg hatch. These are far from perfect as the eggs are located in the soil. The model uses a 52ºF base at a four-inch soil depth.

At the SWROC, we have accumulated 339 degree-days (DD) as of June 7 and are currently accumulating 2-25 DD daily. Egg hatch is projected to begin when 380 DD have accumulated and 50% of the eggs should be hatched between 684 and 767 DD.

Factoid or folklore: The adults of one of the species of fireflies in southern MN often emerge around the same time as corn rootworm egg hatch begins.

I have heard of several fields planted after alfalfa where stands were damaged by seedcorn maggot.

Fields that emerge ahead of others are typically most attractive to soybean aphids moving from buckthorn. Jonathan Dregni (UMN Entomology) has recently found soybeans at St. Paul.

Alfalfa weevil control, pea aphids and potato leafhopper are the primary pests to watch in the second cutting. The hot windy weather likely increased the effect of cutting for insect control, but delayed harvest of windrows can offer protection.

Early varieties of spring wheat, oats, and barley are starting to head in SW MN. Aphid control is no longer recommended after heading.

It might be worth your time to start looking at field borders and any lodged grassed for armyworm larvae. However, these insects often do better in cool, wet seasons.

In addition to the dingy cutworms reported earlier, at least one southern MN sugarbeet field had a replant-inducing infestation of black cutworm. The stage of the larva I observed was the last instar and was close to, but slightly ahead of, that predicted by degree accumulations. This was a shelter area that may have retained more heat. Remember, some larvae are further ahead or delayed in development and smaller larvae were also observed in the field.