Rainfall, air and soil temperatures, degree-days, soil moistures, and other current and historical weather data for the University of Minnesota Southwest Research and Outreach Center (SWROC), a little spot about two miles west of Lamberton, MN, can be found at http://swroc.cfans.umn.edu/weather.

Planting delays have created a wide range of spring tillage and planting dates for corn and soybeans in areas. This will have an impact on this season’s pest populations.

We are starting to find English grain aphids in cereal rye. The presence of small nymphs indicates the first migrating aphids have been here for a bit. Populations are low.

It has been a long, tough planting season for many of us. 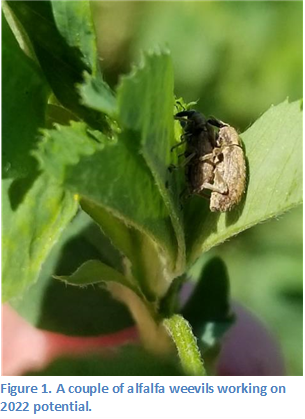 Insecticide applications targeted to economically threatening insect populations have a good chance for ROI with reduced economic or biological risks.

On the other hand, spraying sub-economic alfalfa weevil populations, or spraying too early can lead to biological and economic problems.

Economic thresholds are based on the presence of alfalfa weevil larvae. Anthony Hanson put together a Crop News article on this insect and its thresholds at https://blog-crop-news.extension.umn.edu/2022/05/preparing-for-alfalfa-weevil-in-2022.html?m=1

It’s still too early to make alfalfa weevil treatment decisions, in most, if not all, fields. If you want to panic over alfalfa weevils, please wait until you know you have a field with a problem. You won’t have long to wait.

Small black cutworm larvae should be starting to make their presence known by leaf-feeding on corn and weeds. Do not let emerged weeds persist too long in corn. The chronic wet fields and wind are not helping. We will need some better weather to get post-emerge herbicides on.

There are getting to be some very large lambsquarters in some unplanted fields. These may not all be removed by pre-plant tillage. Fortunately, we have not seen hot dry weather to toughen them as herbicides have a harder time on large weeds.